Our client, the third-generation owner brought their 1960 Bel Air in for a full interior restoration. The 1960 Bel Air has been in our client’s family since day dot and had a price tag of £3,500 which was just over half the price of the average house in the 60s. The original exterior paint colour was black, but our client’s grandfather painted it white as there was another Ford in the town and he wanted his to be different.

The overall goal was to restore the whole vehicle. By the time it was in our workshop, the exterior paint was returned to an original jet-black shade for originality. Our client had decided on a houndstooth fabric for the design that they presented our team. Inspired by a two door 1960 American Impala which had much higher specifications, our team had to accommodate for new features such as the carpets, door panels, front, and rear seats (with pleats), speaker installation, shifter cover, parcel shelf, front, and rear seat belts, fitting of new windows supplied by the client, window channels, boot panel, interior rooflining, sun visors, and sound proofing of the whole vehicle.

One feature in particular that was included in the American model but not the New Zealand model, was the speaker grill in the back seat. This was an added decorative feature that our team had to source and fit as a part of the clients request as well as the houndstooth on the seats and door cards.

Sometimes, here at Napier Auto Upholstery our job requires us to make it look like we haven't done any work on our clients vehicles. This is exactly what our team achieved on our clients 1960 Morris 1000 "Pearl."

The carpets were all replaced, the from parcel tray was remade and recovered, and the front seats were repaired and remade also.

For the past few months Malcolm, Bobbi, and Tessa have been working away on a 1969 Volkswagen Kombi Van. As you can see from the video, our team have carried out work such as stripping the interior, to patterning, cutting, and sewing trim panels, pleats, seat bases and covers, mats, carpets, as well as fitting new seatbelts. They even fit all speaker wires and hand stitched the back of the seats where our sewing machine couldn’t get to!

As you can see from the before and after videos, a lot of hard work and effort went into this restoration. We were beyond stoked to have been able to reunite this beauty of a job back with its owners.

Here at Napier Auto Upholstery, we are very familiar with jobs that come in where they only need “a quick tidy up.” We love them of course, because seeing the customers reaction when we present them with their finished job is what makes our
work worth it.

Here is a very recent job that our team spent many hours on. This bench seat belongs to a 1972 Holden Belmont, which was in desperate need of our help. Thanks to our team’s hard work, reuniting this seat with its owner was 100% worth it.

In October 2021, Napier Auto Upholstery had the opportunity to work with a local student from EIT. Ingrid Savill is a year 7 design student at IDEA School who is studying furniture design and approached our team to help assist her with the making of her fabric shelf that she will have on display at her upcoming exhibition in November.

Ingrid chose to use a vegan leather made from 100% Polyester called ‘Eastwood Tan,’ from a company called Warwick Fabric.  Ingrid’s fabric shelf sits on two wooden dowels and is joined in the centre with some plain stitching. The idea of the wooden dowel in the centre is that it is a decorative feature only that serves no function.

Ingrid came in with her seat and back cushions already made, with the intention that our team could match the stitching on the fabric shelf, in order for her piece to look complete. The idea of the fabric shelf is to be used for storage like blankets or scatter cushions.

Fast forward to November, Ingrid attended the EIT exhibition and received plenty of positive feedback about her bench sofa.  We are thrilled that we were able to help out a student and wish her all the best in her future endeavours.

Girls Show their Passion for Fashion and Cars

Napier women, Bobbi-jo and Tessa, sew up annual awards for upholstery. It takes Bobbi-jo Wilkie about eight hours to hand stitch and wrap leather around a steering wheel.

For her it's a combination of her passion for both cars and fashion. Last week, Wilkie, 36, who works at family-owned Napier Auto Upholstery Limited, won the tier 2 award at the annual OFPANZ (Outdoor Fabric Products Association of New Zealand) conference. “It was awesome winning the tier 2 aware. It was a goal I had set out for the year,” she said.

Apprentice motor trimmer Tessa Paaymans, who works at the auto shop with Wilkie, won the tier 1 award and got overall apprentice of the year at the conference. “This is an industry women can totally dominate in,” Paaymans said. “My mission for car upholstery is to make people push boundaries.”

Both Wilkie and Paaymans previously studied at EIT and completed a Level 4 Certificate in Fashion Apparel. Paaymans also studied Applied Industries at Toi Whakaari in Wellington. Wilkie was introduced to motor trimming from a very young age, with her father Malcolm owning Napier Auto Upholstery in 1982, before she was born.

At the age of 11, she got her first job at Napier Auto Upholstery, doing odd jobs around the workshop. With her love of cars and 25 years’ experience in sewing and her skill in pattern making, she decided to try motor trimming. “I love working with hot rods and muscle cars and am currently in the process of restoring a 1960 Bel Air. It takes a couple of months to restore fully the interior of a car. I really love restoring Camaros – that era of cars are really fun to upholster.”

She also loves the different choices of fabric she can work with, which allows her imagination to run wild, but she has a favourite. “I love working with nappa leather, it’s really nice to work with it and I like the feel of it,” she said. “It’s used a lot in the fancy European cars.”

Wilkie currently works at and manages the workshop and has shares in the company and will take over once her dad retires. Paaymans, 27, has 14 years’ experience in sewing and has a background in fashion and costume. She has spent her life around vintages, classics, speedway and track racing.

She started restoring cars with her dad found years ago and knew that using her skill base in design and sewing would be a good match for auto upholstery, which let her to Bobbi and Malcolm and their vast knowledge.  “I started sewing when I was about 13,” Paaymans said. “There used to be lots of wearable arts competitions and I used to enter them. I really like doing it. I also got contacted by New York fashion Week in 2017 to showcase a collection of six garments,” she said.

“After completing my diploma, I went to work at Weta Workshop for two years, Then I can back to Hawkes Bay. My dad has stated a car restoration business at home, so I joined him,” and soon after she stated working with Wilkie.

Winning the award for Paaymans was “amazing” and she wanted to highlight the achievements, so more people were aware of how to get there. 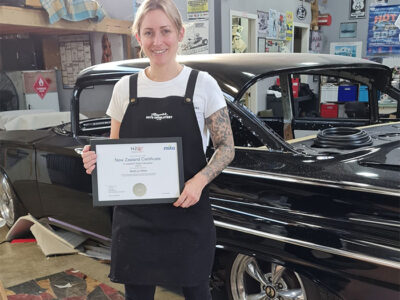 Congratulations to our shop manager Bobbi-jo who is forever learning and sharing her passion. She has just completed another certificate in Industrial Textile Fabrication - Level 3.

The training programme included a mix of practical training and assessment, undertaken in the workplace, and eLearning, allowing her to complete theory elements of the programme at her own pace. She had access to videos, learning activities and course assessments.

Apprentice Of The Year 2020

Bobbi-jo's quality craftsmanship and attention to detail caught the eye of the judges. “I was pretty shocked, but also really pleased,” she says. “At the start of the year I had written a list of goals for 2020 and one of those goals was to win Apprentice of the year!”

Motivated by this year’s successes, Bobbi is showing no sign of slowing down, in fact, she’s already got her goals set for the next year. “I want to take out Tier 2 and overall Apprentice of the year!” she says. More info  www.ofpanz.co.nz 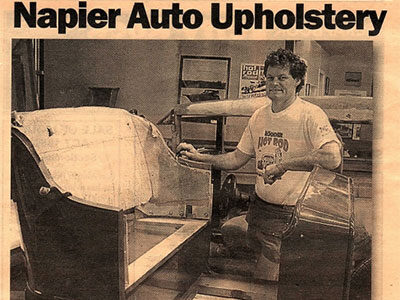 Malcolm Wilkie and his team of professionals have literally got it covered when it comes to all your vehicle upholstery requirements.
So if you're tired of the worn carpet of annoyed with the rip in your upholstery, then leave your vehicle in the hands of the expert team at Napier Auto Upholstery who also offer a complete interior replacement if that's what you're after.
Malcolm has been passionate about anything automotive for more than 20 years he has been in the trade and during hat time he has restored everything from the family car and hot rod, through to the classy classic and venerable vintage.
"Anything at all to do with the interior, then we do it, even if it's modifying a seat that may be uncomfortable for on reason or another," he says, pointing out that even the height of your seat can let your down.
"Some people find the bolsters in the seats of new cars are too high, so we'll modify them to suit individual comfort, because there's no need for the driver to have to put up with an uncomfortable ride."
As well as welding, repairing seats, convertible tops, tonneau covers, van seating, replacement seatbelts and all interior restoration work, Malcolm and his team of Colin and Tim can bring your vehicle back to its pristine condition.
Call in and meet the guys at 20 Thames Street, in Pandora, or give them a call on 835 8365.